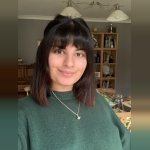 *AVAILABLE FOR BABYSITTING ON NEW YEAR*

I have recently moved to back to my home in York!

I would consider myself enthusiastic, energetic and bubbly. I adore children and enjoy their company immensely and find nothing more rewarding than taking care of them. I believe in creating a safe, positive, happy environment for children, one in which they feel protected and can thrive. I have good organizational and communication skills, which I believe are among the most important skills for a carer. I am a native English speaker but do speak basic French and have previously used key words to widen children bilingual vocab. As well as this I have a excellent knowledge of the EYFS milestones and learning guide which allows me to aid development of young children through fun play activities. When caring for children I like to allow their imaginations to flourish whilst also providing them with the key building blocks and tools to stimulate them in a safe and nurturing environment. I myself am well travelled and highly educated with a polite and ‘muck-in’ attitude to life and work. I also choose to live a healthy and active lifestyle which reflects in my work.

Can send my full CV and references- feel free to message me for these!

Currently I am a part time Nanny to one young girl attending Clifton Pre-Prep!

Main duties include collecting the 3 children aged 4,4 and 6 from school. The eldest cycling and younger two in my bike trailer to house close to primary school. Liaising with teachers making sure parents are kept in the loop, I take the girls to a gymnastics class on a Thursday also. Key focus on educational games, reading and practicing phonics etc in line with the schools work. I then prepare healthy homemade snacks and tea for the children. Upon returning to family home I cook their tea, something healthy and nutritious. We then do homework such as spelling stuff and reading. Following this we do the bedtime routine which involves bath time, getting dressed for bed, cleaning teeth and stories and tucked into bed. Uniforms and pack ups and school bags are then prepared for the next morning and the playroom is tidied. Alongside some light housekeeping, I run errands for the busy family such as grocery shopping, post office runs, organising other staff such as cleaner and gardener. I plan activities for the girls such as swimming, sports and lots of crafts for rainier days which they love. Currently I am encouraging the girls to be more and more independent especially the twins, in their first year at school this is helping them to develop and flourish from small things such as dressing themselves to helping in the kitchen where safe to do so which they love and tidying their bedrooms! All giving them a great sense of achievement whilst teaching them valuable skills.

I worked abroad as a travelling nanny this previous year for one family whose children were aged 3 months, 2 and 4. I worked on a 24/6 schedule alongside another Nanny. Main duties whilst away were occupying children, planning activities, where appropriate taking them on trips and swimming. The youngest required bottle feeding and we began weaning towards the end of the period I was with the family. Cooking the older children nutritious snacks and meals was important and avoiding allergens for older 2 and following dietary requirements from parents. The younger 2 still had naps during the day so planning our day around this helped to synchronise routine with one similar to in the UK. Other duties included normal nursery duties such as Nappies, laundry and ironing for children, sterilising and keeping children’s areas tidy and making sure we had full stock of supplies. During the Night older 2 slept through but being on hand to settle the baby and if other two were to awaken. Bottle-feeding during night and settling baby down. Communication was vital between not only me and the family but me and other Nanny. We kept a thorough nanny diary. Most importantly my role was to help and assist the whole family to make all trips run smoothly. I assisted packing and we were both on hand to help through travelling. We also implemented things such as quiet reading, phonics and letting eldest do tasks such as dress herself and education games focusing to prepare her to begin school in the September. I also assisted the family in their home in the UK between trips following all routines set by Parents.

Prior to my previous position I worked for a family as sole charge to 2 children, aged 2 and 4. I began work in the mornings by waking both children, getting oldest ready for school, dressing him and cooking breakfast, as well as getting the youngest dressed and ready to come on the school run. I dropped eldest off at Clifton Prep nearby to the family home, bringing youngest along with me, weather dependent I may take youngest out for breakfast or to the park on the way home. On return to family home I would plan educational activities in line with the EYFS guide to prepare her for pre-school the following September, throughout the week whilst eldest was attending school, we would attend various groups such as monkey music, gymnastics groups, dance and I would also arrange play dates whether these were in family home, in which case I would prepare healthy snacks and also activities or outside the home. Due to location of family home if we had nothing planned for the day we would go to local attractions such as the art gallery, national railway museum, science museums etc. In the build-up to youngest going to pre-school we attended groups at the school to familiarise her with new setting and ease transition. Other days would include activities such as the beach, soft play centres or trips into town and the children's cinema. In the afternoons we would collect eldest from school, where we then may travel to eldest's co-curriculars at school such as art club, explorers club and language lessons. Most weekdays I would then take both children to David Lloyd, where I would either take them swimming or the eldest would have a tennis lessons. In the late afternoon I would then settle youngest down to an activity such as colouring or crafts, whilst I did homework with eldest. Evening mealtimes would consist of a variety of meals in line with specific dietary requirements, such as gluten and lactose free as well as healthy. After tea, we would have bath time and I would then get both children ready for bed, ready for a story. Both children were in bed for 8pm which allowed me time to tidy up from earlier activities and also get things ready for the next day. During this time, I would also plan activities such as crafts, games, baking or outdoor play to entertain children to reduce screen time on iPad, television and the computer as requested by parents for the next day. An important part of my job was co-ordinating with head housekeeper and also leaving lists of jobs that needed doing as well as the food shop lists etc. As well as running errands such as taking youngest to walk dog, doctors appointments, grocery runs etc. Generally I would have weekends off but I was able to be flexible for parents schedules and did occasional proxy parenting when both parents were away.

The R’s- Temporary summer nanny position
I have also previously been a summer nanny for a local family, although a shorter position I had sole charge of the children who were aged 1 and 3. Main duties included travelling with the family to a variety of locations in the UK and abroad. Prior to leaving for travels, I packed all children's bags, accessories etc. If travelling in the UK, I had a car with a driver which took me and the children to the location. I kept them entertained and happy with regular breaks along the way where we could stretch our legs and also due to eldest being newly potty trained allowed plenty of time for toilet breaks. If travelling by plane, I had main care of the children in the airport. Both children were comfortable to stay sat in pushchair which allowed me to provide snacks I'd premade and activities such as iPad to keep them occupied. On the plane the children always sat alongside me so I could keep them entertained and also do feeds and nappy changes, etc. On arrival at destinations I shared a suite/room with them so I could be nearby in the night to assist and settle the children. In mornings I was responsible for dressing them, applying sun cream if necessary, packing bags for the day and then either cooking breakfast or taking them out for breakfast. During days we did a host of activities sometimes the parents would take over when visiting family but in warmer locations most of days were spent swimming and then during hottest hours I would take children for lunch and then indoors to keep them safe from the sun. In the evenings I would bathe both children and get them ready for dinner, most evenings I would eat alongside the parents and the girls to feed them and then I would take them off to bed and do our bedtime routine. I would have key communication with parents and also with places we were staying to make sure everything was in order prior to arrival. In the time we spent in the family home in Huby, their family dog was present and they had other animals which allowed the children to spend a great deal of time outdoors, as a very active family I had to keep very organized and, on the ball, to make sure trips ran as smoothly as possible.

Message me for current availability.

Fees negotiable, dependent on care needed, number of children, distance etc. message me to discuss a price suitable for both of us.