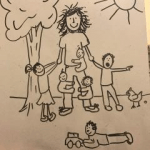 Hi my name is Sharene

I have been an ofsted registered childminder since july 2008.

my family and i live in a large 3 bed town house with a spacious garden,

excellent local links to the city.(via elephant & castle 5mins away)

currently I have vacancies for children aged 6mth-11years

My working hours are flexible,

I look forward to hearing from you.

This childminder has not provided any information about their experience, you should take extra care when checking their suitability.

This childminder has not provided any information about their qualifications, you should take extra care when checking their suitability.

From 35 / 60 per day depending on attendance hours

This member has provided us with electronic copies of the following documents that have been reviewed by Childcare.co.uk and are held on file. The documents have been certified by the member as being true and accurate. We recommend you ask to see original copies of the documents before you hire them in order verify the true accuracy for yourself. Find out more about checks & references.

Below are the latest reviews for reen. Please note that reviews represent the subjective opinions of other Childcare.co.uk users and not of Childcare.co.uk. Parents must carry out their own checks and references on childcare providers to ensure that they are completely happy before enaging in the use of their services.

Reen cared for our baby son (turned toddler) for over one year before we left the country.

I was looking for a home environment for my son vs a nursery environment. Reen offered just that plus lots of activities and we were impressed with the days out like the city farm and local museums.

I would drop him off at 7am which was amazing for me as I had a long commute.

Our son was happy there. They seemed to have a lot of fun. Food wise, we provided our own.

Would recommend Reen as a childminder!

Reen has been looking after my son for 5 years now, and has never been anything but reliable and professional. She is often available at short notice to accommodate my sometime erratic working patterns, and always puts my son's needs first. On the vary rare occasion that she has has to deal with a personal emergency - as we all have to some time - she tries to give as much notice as possible.

Reen is not just a childminder, she is my partner in the raising of my son, focusing on his development as much as I do.

I have absolutely no hesitation in recommending her.

Unreliable - Definitely Do Not recommend

My contract was for Reen to look after my son 4 days a week - Mondays, Tuesdays, Wednesdays, plus every other Thursday and every other Friday,, which meant, I would have my son on my day off. She stated she worked some evenings which was great for me, as my hours at work were due to increase (full day on Mondays) - something Reen said would be fine. After signing the contract and paying for the month on Monday 6th May 2019 (for which she charged me a full day's fee; my son did not start in her care until the next day), she changed her mind and told me she could not look after my son as we had already agreed before payment, on Mondays. This meant I had to find alternative care for my son.

It also meant Reen was being paid for 4 days a week, but only looking after my son for 3 days a week, due to her going back on her word.

Reen had decided to take my son to clubs for which there was a £20 per day charge. She was still paid for full days 4 times a week, and reluctantly paid for 2 days a week for the clubs, but I had to pay £20 for the 3rd day each of the weeks the club ran in addition to her daily fee, despite her not even staying with my son. This meant she was paid 4 full days for nothing!

Also, as part of our contract, she was to help my son with some homework which she agreed to, but upon collecting my son, his homework was incomplete or not touched at at 99% of the time.

Considering Reen had stated she would not be taking any more time off this year until Christmas as she had travelled already the amount of days off Reen takes is shocking (and she has been paid in advance). Taking time off last minute too. I've received messages at 4.49 am, 11.52 pm and so forth which does not give much time to find/make alternative arrangements. I cannot see how this is professional.

Not to mention, another time she had a number of days off, when my son returned to her care, she questioned him, which she is not allowed to do. She called me at work, to tell me she was upset and crying because my son had told her I had said I wanted my money back. Not at any point, did she think she was in the wrong to do what she did, and spoke to me like she was dressing down a child. Turns out, my son had overheard me talking on the phone over the weekend to a utility company and thought I was talking to her. This would never of happened if she had not questioned him in the first place.

One thing that sticks in my mind is Reen's behaviour between 21st - 23rd August 2019. Upon collecting my son from a club (as usual, Reen was not present, but was still paid), on 21st August, there was a notice on the door regarding a trip I knew nothing about, which was taking place the next day, 22nd August. Reen wanted the day off (again) on 23rd August, so I re-arranged to have my day off on 23rd August and instead, and to attend my important meeting on 22nd August. I explained to her what had happened; the adults at the club had said my son could not go on the trip as they needed advance notice to make sure there would be enough adults in ratio to the children. To my surprise (to put it mildly), Reen sent me a message: "I have x 2 interviews tomorrow so I am also not able to have him". The next one to follow: "They are also very important as i need to fill my vacancies". Bearing in mind 1) I re-arranged my meeting for accommodate her day off, and 2) she had already been paid for 22nd and 23 August! Why should I have to pay for her to hold interviews to fill her vacancies?!

I had to call my manager to ask her if I could have 22nd August off, just 45 minutes before I was due to start my shift. Thankfully, she was OK with it, but I still had to attend the important meeting, with no-one to look after my son. In the end my work colleagues came forward and babysat for me ... in the back office. Again, I cannot fathom how someone can see this as professional conduct, so I asked Reen for a refund.

The next day 23rd August 2019, after more than 24 hours passed, I messaged Reen again asking for a refund (all of these messages were done privately), and the response in the WhatsApp Group was "Hi Parents, I will be away for the weekend, my work phone will now be off till Tuesday morning, have a lovely long weekend, Reen, X". She then removed me from the group.

On Bank Holiday Monday, 26th August 2019, Reen messaged me to let me know she would not work out her contract. Luckily, I had already decided my son would not return to her care, and had made other arrangements, so I did not have to scramble to look for another sitter/childminder last minute, or potentially risk having to make the dreaded call to my manager again, just days later, to say I would not be able to going into work ... yet again due to childcare issues.

Had it not been for my 2 sisters and my son's Godfather helping me around their schedules, as well as a really understanding manager and boss, I probably would have been fired from my job because of Reen.

She must have known at some point I was going to write a review, so blocked my original profile. It does not surprise me, as when she questioned my son and claimed to be really upset - even though she was in the wrong - she turned to me and said "I've been doing this (childminding) for 11 years. I have nothing but 5 star reviews". Not sure what she meant by that, but her tone was off ... as if she was trying to warn me. Needless to say, I still felt I needed to write an honest review.

Very unreliable. You are always on edge as you never know when next she'll book yet more time off ... last minute too.

I definitely do not recommend.

I was very nervous returning back to work when my son was 7 months not sure who I could trust too look after my son but me.

When I met Sharene she was very calming and my son took to her in a matter of weeks she has good routines and my son has learned a lot since attending her child care.

I would recommend Sharene she is very caring and patient and does excellent job looking after all the children you can leave your child and be at peace knowing they are in good hand's.

Sharene is an excellent babysitter and childminder. She really knows the children in her care and provides support for them and their parents.
My son has really grown and developed in the time he's been with Sharene. Her service is absolutely excellent.