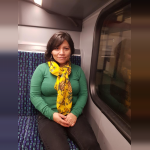 Dear families,
My name is Teresa, I am 41 years old, native peruvian with spanish nationality and I have been living in the UK for 3 years. I have a 20 years nanny experience acquired by looking after children of different age. I am a Nursery School teacher who enjoys working with children and guiding them into education.
All my employers consider me a very reliable and hardworking person, with a positive attitude and naturally endowed to look after children.
I love children, and I have always managed to make them feel happy and safe.
I am very lovely, patient, responsible, punctual, attentive, respectful, energetic, prudent, very organized, quite and cooperative.
I am always willing to learn and satisfy the needs of the people I work for.
I hope that my profile will be of interest for you and I am looking forward to hearing from you to have the opportunity to describe myself more in deepen.

I prepared healthy nutritious and various meals for the whole family, played with the children, ironed, cleaned the house, etc...

I made their breakfast, lunch and dinner, took and picked them up from the school, I played with them, took them to the park, cleaned the house, ironed, etc..

I studied Portuguese and IT.

Live in and live out: Nanny Madrid, Spain

I worked for the same family for 8 years.

Live in Nanny, one year and half: in the mornings the baby was with another person. In the meanwhile I prepared healthy nutritious meals, cleaned the house, ironed, etc..

In the afternoons I was taking care of the baby, singing, changing the nappy giving him the milk, taking him to the park, stimulating his learning capability by telling stories, reading books etc..

Live out Nanny: when the second one was born, I only dedicated myself to take care of the children: Preparing balanced diets, playing lego, telling stories and singing songs, early stimulating, taking them to the park, I picked them up from the school, homework.

I help them to learn how to live friendly and quietly with other children. Supported them in writing and reading, etc..

I worked as an Au pair to two children (0-5 years old). London

I stimulated the baby, I gave him the milk, changed the clothes and nappy, played with him. I made breakfast for her, bathed her, took her to school and picked up girl from the school, played with her, homework, took her to the park, ironed, sometimes I cooked for her, and cleaned their rooms .

I prepared milk and gave to the baby, changed the clothes and nappy, gave him lunch and dinner, stimulated him. I played with them, bathed them, we went to play group, sang songs, made crafts, sometimes I made their breakfast, lunch and dinner, homework, cleaned their rooms, ironed.

I gave him breakfast, lunch and dinner, changed nappy and clothes, I encouraged him to walk, stimulated, took him to the park, we went to playgroup, played with him, bathed him, telling stories, I sang for him all the time, many times I made meals for him, sometimes cleaned his room and washed his clothes.

I frequently travelled with the family.

I used to prepare healthy nutritious meals for breakfast, for lunch and sometimes for dinner.

I regularly dropped and picked up the elder girl from school and while she was there I always took the younger to different play groups, parks, museums and play dates. After coming back from these play groups I used to organize many different indoor activities such as writing reading painting and singing.

Among my routine tasks there were the washing up and folding their clothes and tidying up their bedrooms.

When they were on holidays I used to spend all the time with them organizing activities such as pic-nic, visits to museums and galleries, walks in the parks and soft play.

In my opinion the most important thing is to see that children enjoy every moment and they are happy.

I am studying English

I have very good references

I am available to work full time or part time.

This member has provided us with electronic copies of the following documents that have been reviewed by Childcare.co.uk and are held on file. The documents have been certified by the member as being true and accurate. We recommend you ask to see original copies of the documents before you hire them in order verify the true accuracy for yourself. Find out more about checks & references.